What do you call those little bits of paper that they attach to teabags so that you can easily grab onto the string or wrap the string around the finger handle of your teacup?  The paper doohickey?  Yes that’s the one.  Well, I have one (from Yogi Tea) that has been on my refrigerator now for around 8 or 9 years that says, “The heart sees deeper than the eye”.  That is a keeper.  All that wisdom for only around 20 cents:-)

I think this relates to photography in that we shouldn’t get too hung up on rules and should let our heart tell us what and how we photograph. In other situations, take advertising or a con artist for example, we can be distracted by flashy talk and promises, yet if you give your heart a chance it can tell you when something is not right.

Coming home late from a function one night I almost walked past this angel standing in the cold in front of an izakaya (Japanese old style family restaurant).  The old black and white photographs of ships behind her add an interesting element, along with someone’s bag draped over her head, and the whole thing looked very peaceful to me. Well.. I only had had a couple drinks (I said as I held up 3 fingers)..

In comparison to some HP5+ I had shot also at 1600 and developed at the same time in the identical caffenol stand recipe I thought I noticed what I thought to be a bit more grain in the HP5+, however after looking a bit more closely they seem pretty similar. 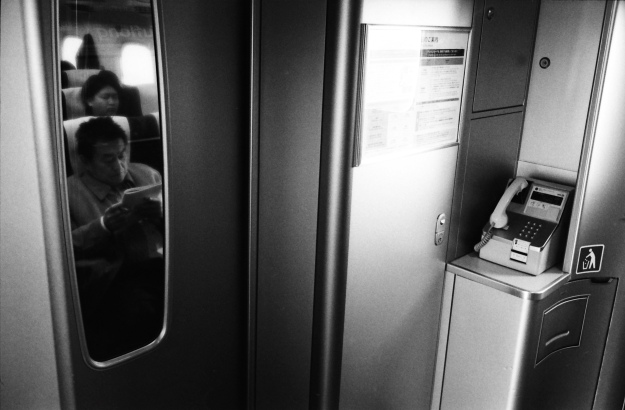 These are full size crops of the scans of each (at 2400). Not much in it.  Both are good considering the two stop push and the type of film I think. I would have to scan at a higher resolution to get a definitive answer.. Technically I suppose I would have to ensure both were the same exposure and the area compared of similar density but I don’t intend to get that technical about this stuff.